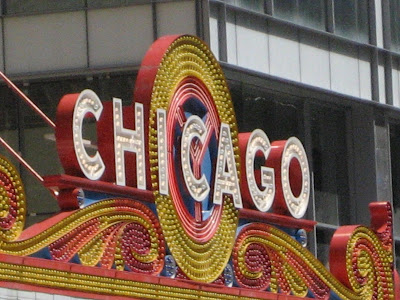 I don't know about you, but when I think of Chicago, I think of great music, great food, and great shopping! We, that being the 'rents, my baby sister and I drove all the way to Chicago... for...Eric Clapton's Crossroads Guitar Festival. (in aid of THE CROSSROADS CENTRE ANTIGUA) 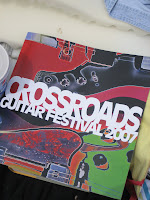 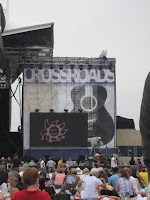 And wonderful it was! We were there bright and early saturday morning to plant our rears on our blankets on the ground of the Toyota Park (location of Chicago's soccer team), and waited until noon for the day-long show to start. It was humid and warm in the morning with clouds, hot and very sunny in the afternoon, and cool and calm in the evening.. 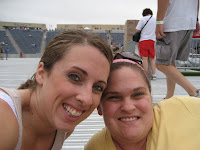 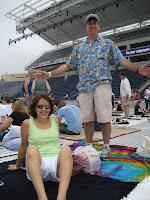 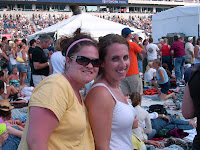 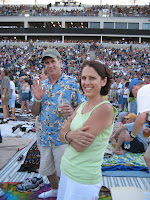 Bill Murray was the host, and he was hillarious. 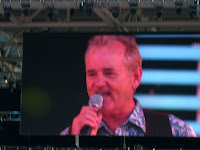 Each person performed about 3-5 songs. I can't really complain about any of the artists, they were all wonderful. Jeff Beck did have a heavier type of music... a lot of guitar and not much else. Plus, his songs were really long and it seemed as if he was up there too long. But, I must admit, he is quite the artist. He is one mean, playin' machine... hands-down.
I was so excited to see Eric Clapton, 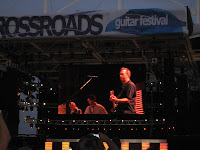 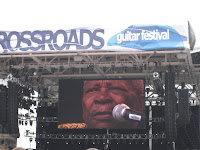 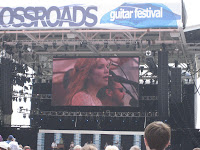 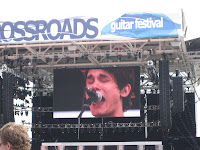 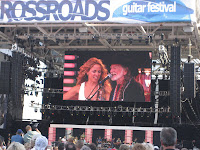 And.. I was excited to hear of more awesome artists and have fallen in love with the music of The Derek Trucks Band (featuring Susan Tandeschi)..... 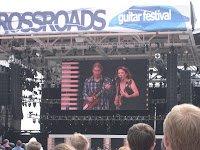 Derek Trucks has his own band AND performs with Eric Clapton as well... (see video of both performing at the concert in post below) 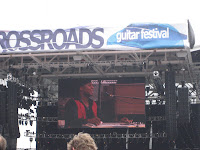 This was one of the greatest concerts I have ever been to. Mostly because of all the wonderful artists... TRUE MUSICIANS... I have always liked a lot of these artists, but to actually see them perform and there musical (guitar) abilities... it just blows my mind away... especially John Mayer, Eric Clapton, Derek Trucks, B.B. King, and Robert Randolph.
(I have alos posted another video of John Mayer and Eric Clapton from a while ago.... you can see their awesome talent!)
There had to be over 20,000 people at this concert. The seats were full and the actual soccer field was ful of atleast 5,000 people! After a near 12 hour concert, whether on our feet dancin' to the music or sitting between sets, we got home late that night, but slept in Sunday morning. From there we spent a good portion of our daying consuming wonderful shopping, and great food! 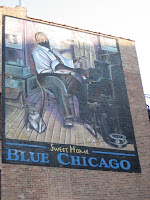 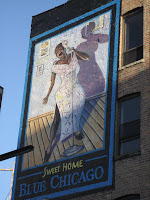 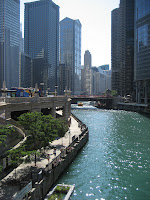 The Kerryman... a wonderful Irish Pub! 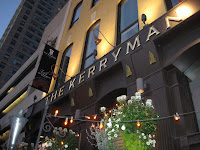 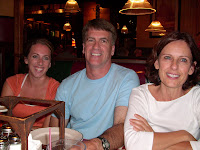 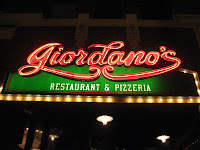 Mmmm. What a perfect way to spend the last night in Chicago!
Posted by teacherwoman at 2:44 PM

That looks like a great trip!! How fun that you took the trip with your family!!

Looks like a great time! I would've loved to see Sheryl Crow and John Mayer.

Dang that was a Score! Been to Chicago 2x and love it!

WHAT A GREAT CONCERT!!! I a so jealous! My husband loves Cubs bball, might have to encorporate the festival with bball next year!

Sounds like a great concert and trip...have you ever done "wee-fest", not even sure I have it spelled right or not...it's something that Bonnie has done before we met...think it happens in northern MN somewhere each year.

OMG! I live so close to the Kerryman its not even funny - wish I would have known you were there - I would have came and bought you a beer.

Looks like a great weekend though. Just don't try to come back in Feb - not so much fun.

Giordano's is my favorite. Of course true Chicagoans say that it's a tourist hangout and there are much better places to get Chicago Style Pizza, but I really dig it. I didn't get over to Chicago this year and I really miss it. That had to be an amazing show.

My husband is originally from the far north west Chicago suburbs. When I think of Chicago, I think of Cubs games.

Just found your blog-great stuff! Kudos to you for doing the job that you do:)

wow.. what a line up! sounds like you had a terrific time

It sounds like you had tons of fun! That concert had quite the list of names! That's the way to spend a vacation. :)

LOVE the Clapton/Mayer video! This looks like a blast. Do they do it every summer?

Love John Mayer. I would really enjoy to go to one of his concert's. Sounds like you had a blast!!!

A fabulous trip - a fabulous concert! So jealous here! :)