The BF and I returned from our wonderful trip to San Diego Monday evening and were sad to realize that our vacay was already over. Here's a wordy run-down of our 6 days of adventures!


Tuesday, July 27th, 2010:
While the BF was driving to Fargo, and less than a day before we were to fly out of FARGO, he get's a notice that our flights were CANCELLED. After a few phone calls, we got put on a different flight, out of Grand Forks. So, after the BF made it to Fargo, we packed up my car and drove the hour north to GF and stayed the night with my aunt. It was a nice relaxing evening, but still disappointed that we had to add that extra drive to our trip, as well as parking the car at the airport. *WARNING to all those that travel with me, by air or by land - I BRING BAD LUCK*

Wednesday, July 28th, 2010:
Arrived at the airport before 7am, realized the flight was delayed a half our, and was only able to print one of my two boarding passes. Made it to Minneapolis with just enough time to get my second boarding pass before the plan began boarding. phew.


We arrived in cloudy San Diego right later that morning, grabbed our bags and got our rental car - the Chevy Colbalt leaves little to be desired.


We were staying at Loews Resort in Coronado and arrive shortly before 1pm. Check-in wasn't until 4pm, so we went to grab a bite to eat at the Market Cafe in the resort while we waited. Who knew the portion sizes were so big, we could have shared our first meal. But, it was tasty! This place has the best fresh fruit! 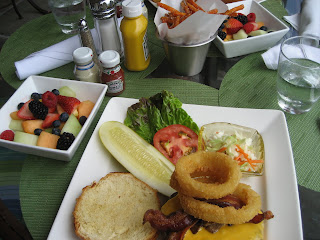 While we enjoyed our meal on the patio, we took in a beautiful view of the Bay area. 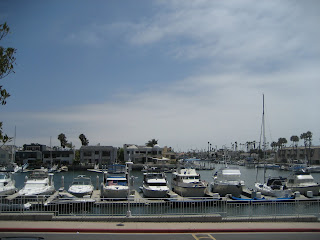 After getting settled into our hotel room, we decided to take advantage of the Wednesday night Wine Tasting on the Gondolla. The experience exceeded our expectations. There were about 12 people on the gondolla, including the wine connoissuer sharing 6 different wines with us. Plus, there were chocolate covered strawberries to enjoy, and I didn't have a problem trying one or two. 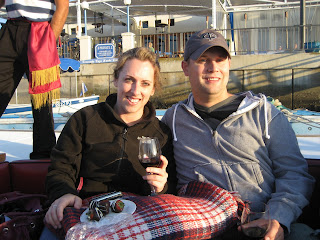 After the near 2 hour gondolla ride, we grabbed a late dinner at the Mistral - another resort restaurant. With our meals, we enjoyed our new favorite wine, Dona Paula Merlot. It was wonderful!


Thursday, July 29th, 2010:
The only thing we had planned for this day was to attend the Padres vs. Dodgers game that afternoon at Petco Park. We headed into San Diego later that morning, parked, and took a walk through the area before grabbing a lunch. The park opened a couple hours before the game started and spent some time walking through and taking photos. We even sat a bit on the green grass mound behind left feild. There were about 45,000 people at the game and the spirit of the fans was definitely heard. The Padres ended up winning in a 9th inning walk-off! Too fun. 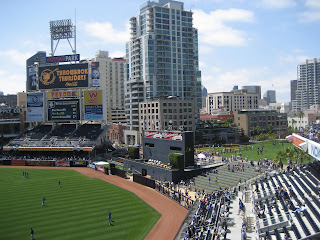 To top of the fun, I managed to sun burn my shoulders/neck the first full day we were in San Diego, even though I applied sunscreen 4 times during the game. I guess the hour or so of walking around before the game is what really got me.


This evening we grabbed dinner in Coronado at Mc. P's Irish Pub & Grill. The food was okay, but I think the we both really enjoyed the atmosphere. There were baseball games on all tv's and we found out later that they have live music every night! We stuck around that night for a bit to listen to the husband and wife duo performing songs from the 50's and 60's. Very entertaining!


Friday, July 30th, 2010:
We shared a pizza for lunch at Alexander's Pizza in Coronado before heading to the San Diego Zoo. All I can say is DELISH!


Most of our day was spent at the zoo, and even though I took tons of photos, I won't bore you with those. However, I will share my favorite that left us laughing for a long time! My new found love, the Hippo! 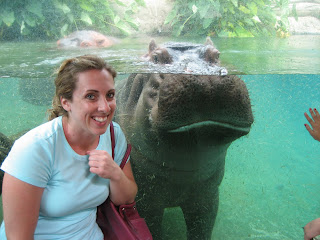 This evening we grabbed another late dinner, sharing a burger and nachos at the bar in the resort. The food was pretty good, but it was disappointing to see 3 different "restaurants" in the resort that served pretty much the same menu coming from one kitchen. It was pretty limited on the resort.

Saturday, July 31st, 2010:
We didn't do much on this day. For breakfast, we enjoyed a good meal, and the environment, at Clayton's Coffee Shop in Coronado. The temps were a bit warmer (almost 70 degrees) and we were ready to enjoy some time by the pool. 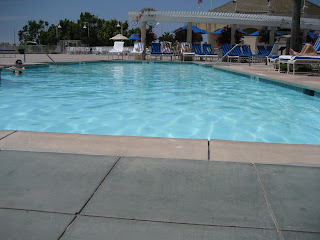 Our resort at 3 pools, an adult pool, a family pool, and a kids pool. The adult pool was nice and quiet and I loved it. We both had a mojito from the pool bar, and even though it was a bit spendy, it was the best mojito I have ever had! The BF enjoyed it to, and it was his first! We also played a little ping pong while out on the pool patio. 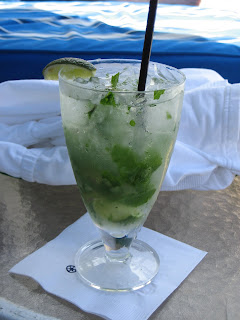 For dinner we ventured back into San Diego, in hopes of finding a good mexican restaurant I had read about online. However, even with the Garmin, we wound up in a shady spot and decided to go with plan B - House of Blues. The food was pretty good, and live music was starting at 8pm, however, we were a bit wiped out and ready to head back to the resort. I know, we're old.

Sunday, August 1st, 2010:
This morning I had one of the best breakfasts I have ever had in my life at the Beach -n- Diner in Coronado. Asside from the best french toast evah (that I will never feel guilty about eating), I had a side of scrambled eggs, bacon, and home fries. Obviously I didn't finish it all, even with the help of the BF. I think he enjoyed my french toast more than his pancakes! 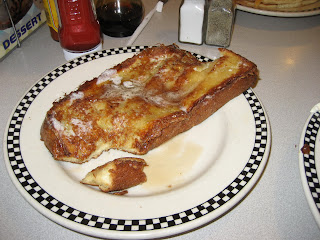 We spent the afternoon at the Silver Strand State Park, which was just across CA-75 from our resort, to dip our feet in the Pacific Ocean and enjoy some time at the beach. I think this was the best 10 bucks we spent on our trip, and were sad it was the only day we were able to get out there. The weather just wasn't that warm until then. 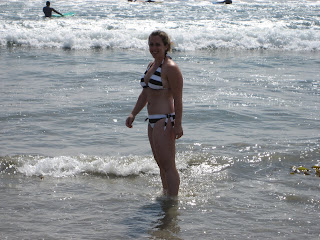 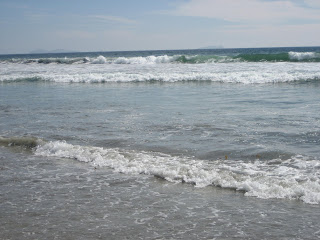 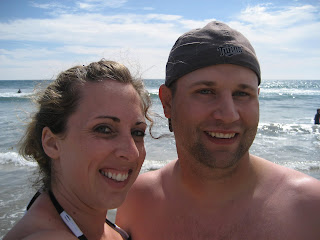 That evening we enjoyed a good mexican meal at the Costa Azul in Coronado. From there, we walked around a bit and grabbed a glass of wine at the Bistro d' Asia & Sushi Bar. After seeing some of the meals people had ordered, this is definitely a place I would like to try the next time I go back!

Monday, August 2nd, 2010:
We were up early, packed and checked out of the hotel shortly after 8am. We returned the car to Enterprise, and got to the airport more than 2 hours before our flight was to depart. Shockingly, I had troubles with my tickets, again. After standing in line for quite some time, with no service, we were able to figure things out. I got my boarding pass for the first leg of the trip, but had to wait until I got to MSP again to get my ticket for the second flight. grrr.


Once we got our bags checked and through security, we both were ready for a beer! And dangit, did we enjoy it! The BF ordered a beer that was a microbrew from a local brewery - Karl Strauss Brewing Company. It was yummy! We shared a breakfast pizza and then ended up ordering another drink - the best bloody mary I have ever had! 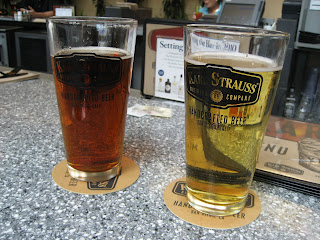 We got into Grand Forks around 830pm, grabbed our bags, paid our parking fee, and drove back to Fargo. It was a quiet drive, as I think both of us were tired and sad to see the vacay was over. But, we both said we would love to go back... sometime! All of the people we encountered while in San Diego/Coronado, whether they were employees, residents, or other guests, were sooo nice. It was very welcoming!
Posted by teacherwoman at 6:05 AM

Sounds like all in all it was a great vacation. The San Diego Zoo rocks!

I love San Diego! Sounds like a fabulous trip.

What a great trip!! Too bad it wasn't warmer (isn't this California in August?!) but it sounds like you made the most of it!

Oh, that sounds like an amazing trip! I am so glad you guys made the time to do this! I can't wait to hear even more details - TONIGHT! I am SO excited to see you -its feels like its been too long! (lots of exclamation points!!)

Looks like you had a gorgeous little romantic vacay! Love Coronado!

it means a whale's vagina... HAHAAA ohh david made me watch that movie A LOT.

What a great vacation! I'm excited for our bike ride tonight! And jealous of your fun weekend plans!!!
Amanda ;)

Looks and sounds like a wonderful trip! The picture of the hippo is awesome! :)

sounds like a fabulous trip!! glad you had fun in cali :)

I love SanDiego, Glad you had fun

Glad you had a wonderful time while you were here, and that by the weekend, the sun finally came out (I have no idea what is up with THAT?). Next time you come back and we'll have do a race or something. That way we'll have a legit reason for a meet-up and we won't freak out the non-bloggers :-))

Glad you guys enjoyed your vacay! Sounds like you guys had a great time!

Looks like you had an amazing time! I have bad luck with traveling as well...haven't been on a flight that left when it was supposed to in my last 4 times traveling!!

Those are GREAT photos!!!

This looks like such an awesome trip. Eric and I have been wanting to go to San Diego for so long, I'm not sure why it hasn't happened yet haha. The beach looks gorgeous, and all the food, yum!

Sounds like you had a great trip. My husband has some family out there and we'd love to go sometime.

Looks like you had so much fun! I might be heading out to San Diego for a conference next year and it was good to see all the fun things to do.

Trying to get caught up with everything I missed!!

Looks like you guys had a wonderful vacation! So glad you enjoyed SD!