We haven't had a Blizzard like this since the blizzards (yes, multiple) of the 1996-1997 winter. The weather channel people drove up here Friday night to catch this nasty blizzard and said this was probably the coldest storm they had reported in. We also made the Today show this morning...

Supposedly we only got about 9 - 10 inches of snow, but with the additional wind and drifting, causing white out conditions, it was ugly. Many interstates were closed. However, the spring after those blizzards consisted of the nasty flood of '97. Hopefully this will be our only blizzard this year, as the water levels were already higher this fall before things froze over.

This is the picture I took of my front (side) door last night before heading to bed. Notice the snow drift in the window. I decided to sleep on the couch in the living room because I could already hear the loud tractors clearing out the parking lots across the street at the apartment complex. 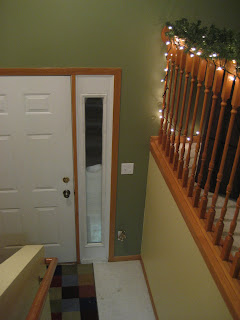 Not too long after laying down on the couch I heard a big bang and scraping noises. Yes, someone was shoveling the sidewalk and steps along side my house. That someone being related to my wonderful neighbor.

When you buy a house, especially a twinhome, you never know who you are going to end up with on the other side and I must say I have been truly lucky, and grateful! He has not only plowed my driveway numerous times, but had his 20 year old son shovel my sidewalk and steps last night at 1030pm in the freezing temps. 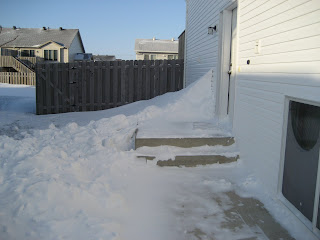 Here's the view of my backyard from the patio door. It's hard to tell, but there are some pretty tall drifts in the back corners! 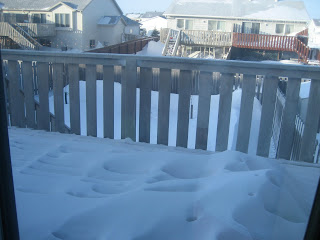 When my alarm went off at 6am this morning, I ran to my bedroom window to see what the streets looked like. They were plowed, but 4 foot snow piles were left in front of driveways. It wasn't too long after that that I heard the rumble of a snow plow and knew that my neighbor was plowing the pile of snow at the end of our driveways.


I bundled up and went out to take a couple photos of the aftermath of the Blizzard. Dang, it was so cold (14 degrees below zero - feels like 38 degrees below with wind chill) and I was only out there maybe 2 minutes. But, on the upside, the sun was shining!

Looking South, down my street this morning. 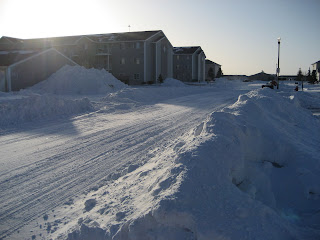 Looking north, up my street. 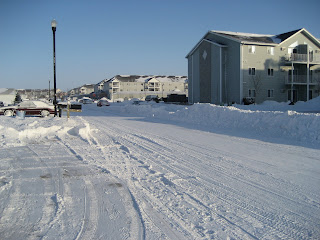 Like I said, the wind was horrible, leaving little to no snow in some areas, and then drifts like this in a neighbors yard. 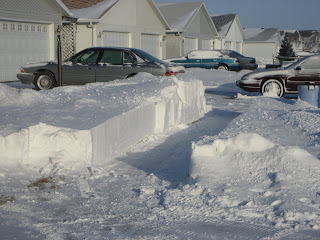 What does one do when stuck inside a house all by herself?
Besides going stir-crazy? I bake....and baked. First, my favorite (and very easy brown sugar cookies)... 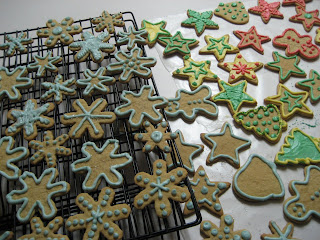 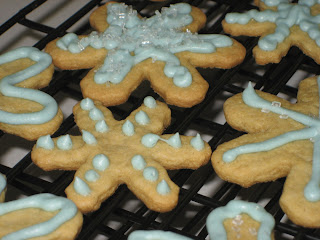 My turtles... consisting of round pretzles, rolos, and pecans. 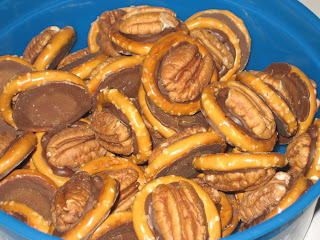 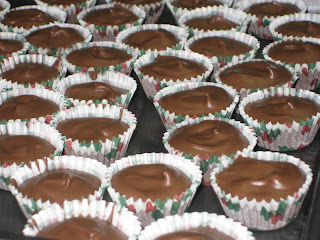 And holiday pretzels covered in white almond bark and sprinkes. 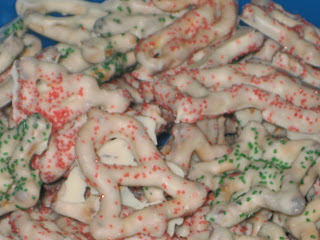 I still have one more thing to bake, but need to make a run to the grocery store to get chopped nuts. I will finish those later!
Since we do have a snow day (no work, but we will have to make it up in February), I will enjoy my extra day off. Supposedly the gym is going to open at noon, so I will probably head there for a nice run and maybe lift session since I have the extra time!
If anyone is looking for recipes of the above goodies, feel free to let me know and I will post them!
Have a great Monday everyone!
Posted by teacherwoman at 10:43 AM

The morning snow looks so pretty with the blue sky and sunshine and all, but 14 below...YIKES!

How deep is your snow off the deck? I looks so tempting to jump off!

Wow, it sure looks nasty over there! Yay for snow days then! You definitely have some fantastic neighbours. That is so nice of them to plow and shovel for you! Delicious looking goodies by the way. Would love to see the recipes! Feel free to e-mail them to runnerleana@gmail.com if you want!

You know, I wouldn't mind getting one nice storm like that. However, here in NC the whole city would be shut down for a week!

That snow just looks CRAZY! I'm sitting here looking at an iron gray sky and some wind and thinking that 50 something degrees is "cold."

OMG that's a ton of snow and a ton of baking. We haven't seen the first flake yet here in SC. We might not get any this year.

But boy that baking looks great. maybe my wife needs to get snowed in some!

BEAUTIFUL!!!! And your cookies...totally yummy and pretty!!! I would have eaten ALL of them if I made those!!! Thanks for sharing the pictures, and thanks for stopping by with the kind words on the "injury report".

dang that's a lot of snow! At least you were productive with all the baking! Great job! :) stay safe out there!

Your neighbor rocks. And so does your baking.

What a great neighbor!

And you were busy while it was blizzarding! Your cookies look both pretty and tasty. Mine usually just look tasty. LOL

That's a lot of snow. I'm jealous. And the peanut butter cups? They look delicious!

Wow you hit the jackpot with neighbors!!! Glad to you had someone to help you out with all that snow!!!

Wow, I cannot believe all the treats you made! It all looks so delicious!

Wow! All those treats look delicious!!! I would love to see the recipes!

I can not even fathom what -38 degrees feels like.

I'm glad you are safe and have great neighbors. I'm also glad I moved south and not north.
And your cookies look great.

And wow on the blizzard!! Would you believe it was 65 degrees in NYC today??

Wow that is some snow! Good call on the baking!

That post was frightful to begin with with all the snow pictures. And so very tempting to end with all the goodies.

My mom and dad lived in ND for a few years back in the early 70's when Dad was stationed at Minot AFB. I've seen pictures of snow like that. Dad even lost his car on the side of the road during one blizzard; the snow just covered it (and many others) right up.

What is truly amazing (coming from someone who grew up in the NE where 3" of snow is a 'blizzard') is how quickly your streets were plowed and taken care of. Y'all have it down to a science!

That's a lot for one storm. Last year we got a crazy amount of snow; our snowbanks were so high that you couldn't see our house from the road unless you cross the street, and then you could see our roof.

One of my teammates that lives a few hours north of me had over 10 feet of standing snow in his yard, and that was just the snow that fell and not the drifts or snowbanks! Hopefully this year has a more reasonable amount.