Good food was eaten, strong drinks were drank, a mountain was climbed, shopping was done, and we took in the the warmth and sunshine every moment we could. Here is a run-down of our wonderful long-weekend in Arizona. 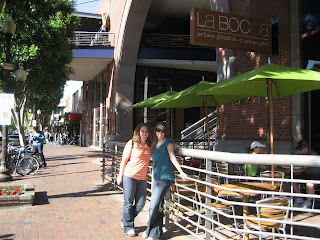 After our 7am flight being cancelled, we got reservations for the 11am flight. We woke friday morning to find that our 11am flight was delayed, but were able to catch the 12:00pm flight. Phew. We arrived in AZ around 1:30 their time. Pam, Steph's friend that we were staying with, took us to Tempe and we walked up and 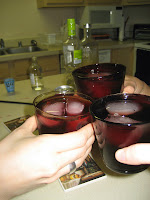 down Mill Avenue for a bit and then grabbed a snack and drink at La Bocca. We headed to Mesa, dropped off our bags and got ready for a fun night of food and dancing. We might have "pre-gramed" it a bit.

We joined a few of Pam's friends for dinner and drinks at the Cadillac Ranch. It was pretty good. We were planning on sticking around to ride the mechanical bull and do some line dancing, but it was still too early for that and headed acroos the street to a different location for some drinks and a lot of dancing. Good times were had by all! 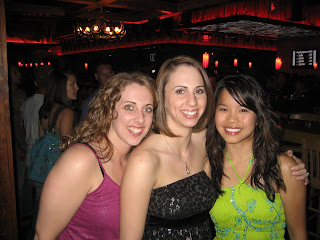 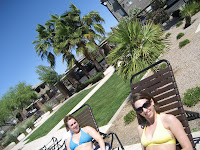 After a late night of drinking and dancing, we slept in a bit and then headed to the pool to catch some sun. Steph and I enjoyed our books while Pam was studying her flashcards for her Boards exam. The pool was freakin' freezin. I put my feet in a few times to cool off, and then out of no where, Steph dove in. I thought she had lost her mind. Before I knew it, all three of us were in it cussing like crazy for how cold it was. 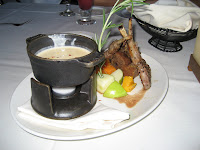 After a while in the sun, we made a nice lunch of shrimp and pasta. It was delish. We spent the rest of the afternoon getting ready and headed to Scottsdale. We did a bit of shopping in Old Town, and then headed to the Roaring Fork Restaurant for dinner. I give it two thumbs up. We enjoyed dinner on the open patio. It had been a while since I had had a burger so I just HAD to order the "Big Ass Burger" ... just so I could say that! Ha! 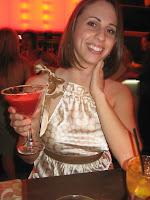 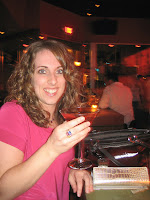 After dinner we did a bit of shopping and then headed to Suede for a drink or two. I loved the atmosphere, the drinks were awesome, and the music was fun. We didn't stay out too late or drink too much because we had to get up early to go hiking. 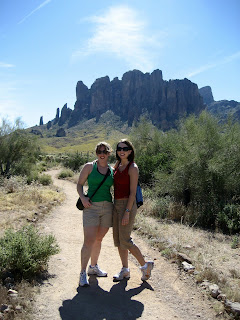 Sunday:
We woke up, had a breakfast of raspberry-chocolate-chip pancakes with fresh strawberries on the side. Mmmm. We made cold meat sandwiches and packed them with the rest of the strawberries, some chips, and bottled water.

We were ready to attempt the Superstion Mountain. It's so hard to explain what it was like to hike this Mountain, but I will try my best. 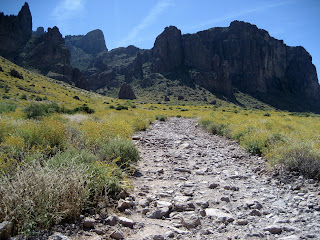 We started at the foothills and even though it appeared to be flat, there was a gradual incline for what seemed like a very long time. Then, before we knew it we were on all four climbing or trying to catch ourselves from falling. 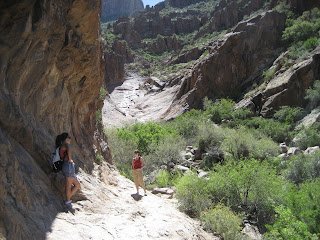 We stopped to eat our lunch in the shade and enjoyed this view.... 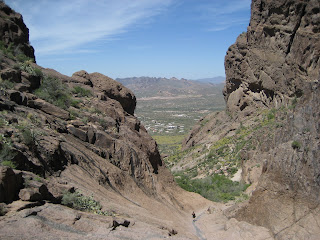 We only went a bit further up, and after about 1.5 hours of hiking, we turned around as it was starting to get hot. We probably only made it 3/4 of the way up, probably not even that much. There were times where we were climbing up that I wonderful how in the world I was going to get myself back down. Sure enough, on the way down, I found myself sitting my butt down on a boulder and using my arms to get myself down. It was such a great experience. 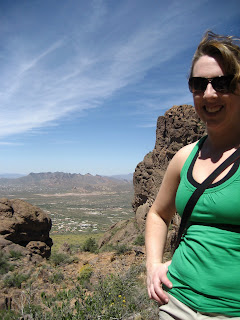 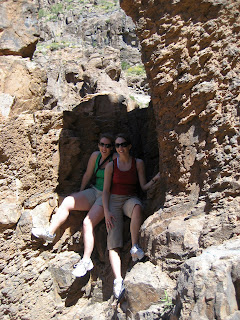 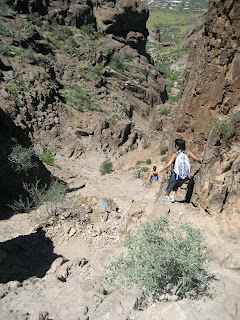 ... Coming back down ...
After hiking we were all very thirsty, thinking we should have brought more water. We stopped on our way back through Apache Junction and I picked up a powerade while they grabbed a couple slushies... I had to admit, I enjoyed the frozen coke/cherry much more than the powerade.

When we returned to Mesa, we headed over to Pam's boyfriend's place. We wanted to take a dip in a pool that was probably a bit warmer. It felt so good, but didn't last long. We were hungry and headed back to shower before dinner. We ended up eating dinner at a nice sports bar and grill, BJ's Restaurant and Brewhouse. Steph and I each got a calzone and shared them. Very good. The four of us shared the cookies and cream pazookie afterwards. I will have to admit, it was the best desert I had all weekend! 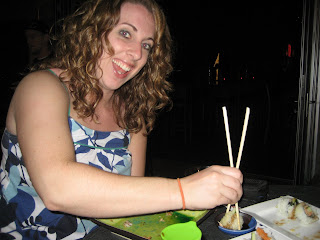 We toured Mesa a bit more that night, and in the process of deciding what to do, we headed to RA Sushi in Dana Park for a cocktail. Before we knew it, Pam ordered sushi, as it was reverse happy hour and we all were eating ... again. But, this was the second time I have ever had sushi and kind of enjoyed it!

Monday:
I woke up and was very sore from hiking. Not like the sore you get from running or biking, a competely different kind of sore. But, I was cool with it because I knew I had worked muscles I haven't probably worked in a long time.

Pam had school today but left her car with us. It's amazing how easy it is to navigate in AZ with their grid system and what not. Steph and I went back to Dana Park, enjoyed a cool coffee drink, some shopping in the morning, lunch with Pam and her boyfriend, some more shopping (mostly window), and headed to Tempe and walked up and down Mill Ave. .... doing a bit more shopping. Once Pam was home from school we headed out to do some serious purse shopping in Chandler (no luck for me). Afterwards, we grabbed a late dinner at Kona Grill. This was a fusion restaurant, american and japanese. I liked it a lot and would highly recommend it!


We finished off the night with desert at RA Sushi back in Mesa. We shared the cinnamon tempura ice cream. It was so delish! 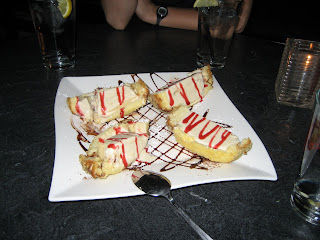 Tuesday:
Our last morning in AZ. Steph's friend had school and was gone in the morning before we woke up. We were up at about 7am and took advantage of the nice weather before it was time to leave. We grabbed the tennis rackets and a couple balls and headed to the court. The weather was gorgeous, probably about 75 degrees. I forgot to bring my camera out with us and thought I would come back to take some pics. There were a few lemon trees next to the court. I had almost mistaken the lemons on the ground for tennis balls.

It wasn't too long after our short "volleying" of the tennis ball that we were packed and heading to the airport. The trip came and went all so fast. We were truly fortunate to have such a wonderful friend to stay with and show us a good time.

I can't wait to head back! Next time I plan to stay longer, and I WILL conquer the Superstition Mountain!
Posted by teacherwoman at 7:46 PM

I'm not sure how you survived after all the shopping!! ROFL!! What's up with the three hawt chicas and no men! So sad ;-) Is the Cadillac Ranch similar to the Bunny Ranch? ROFL!! Oh, crap. I'm going to be disowned in blogland. So sad :-(

That climb up the mountain looks like such fun, and great pics too! Sorry you had to return to the real world, but you deserved a nice "spring break" :-)

Great pictures - that mountain sounded like a lot of fun.

And sushi only twice - Seriously?? You need an extra dollop of wasabi on you next sushi for that :)

Sounds like a great trip, glad you had fun. Reading about all this Sushi eating has me craving a fix.

Sounds like you had a great trip (once you were finally able to get there). Those are some great pics you took. The views from the mountain are amazing. Its a shame you didnt get a chance to ride the bull :(

Great post about your trip to our town. That hike up the Superstitions is a tough one. Good job with it. Next time you come out, we will have to get the gang together for a run.

Sounds like a great trip! I'm glad you had a good time!

Hello. This post is likeable, and your blog is very interesting, congratulations :-). I will add in my blogroll =). If possible gives a last there on my blog, it is about the GPS, I hope you enjoy. The address is http://gps-brasil.blogspot.com. A hug.

Whoooaaaa look at those hot mommacitas! Whoot! Sounds like a great trip ;D

I'm so jealous! The pictures look great. I need some sunshine! (I do get to go to AZ in a couple months, though.) Glad you're having fun! :)

Looks like the weather was great and it was a lot of fun.

Sounds like an extremely fun trip. You sure did a lot of activities!

You did all of that in my town? LOL!! I know about the shopping but I had no idea about all of that good food. Hmmm...I guess I need to get out more.

Sounds like a very fun weekend. I have been to Mill Avenue!! Fun times!

awesome coverage of a great trip, felt as though I was there!

Hotties at the Cadillac Ranch! :D

Had I known, I would have tipped off my single guy friend - he lives in Phoenix. :D

Looks like you all had a great time...love all of your pics and your report...thanks for sharing!
I have never been to Arizona...might need to start planning a trip!
Take Care!

I think I might need a trip that that. :)

Wow!! That looks like an amazing trip. I'm very glad that you were able to go.

Lovely photos. Seems like good times were had by all.

Looks like a great time. The pictures of the hike are very cool. Looks like my kind of trail. Glad you got to enjoy some sunshine as well.

Thanks for the comment over on my lemonade post.
I'm dyin though....send me your real email to me so I can show that we took pictures from 3 of the EXACT same spots on that hike, when we did it in March.
You were smart to turn around that day. You had another hour and a half to the top easy, and it gets WAY harder after the Basin.
Andy
tri.angle62@yahoo.com
I think you did once before.....

AH, great pics. Looks like a fantabulous time. Not sure I would have survived the mountain. I can hang on the stiff drinks though. :D