Congrats to the Boston Celtics 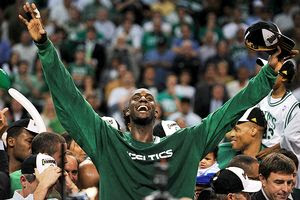 Gabriel Bouys/AFP/Getty Images
You tell 'em, Garnett!
The Celtics royally creamed the Lakers last night ... winning the 2008 NBA Championship .... and I missed it all thanks to softball. However, I did make it home in time to watch the majority of the press conferences and was up way too late...but it was just too exciting!

Last night was a perfect night of softball. The sun was up until almost 10pm, the air was warm, but the mosquitoes were definitely beginning to make their appearance. It doesn't help that we have received a more than adequate amount of water in the past couple of weeks, which have created large breeding grounds in many grass areas. We won our first game and tied our second. Very fun!

I do not miss the mosquitos of MN and ND. They're like birds!

Yea, swim workouts have a way of doing that!! Congrats on the softball!!

What a game. The Celtics are the champs. It really annoyed me that announcers kept saying Kobe Bryant was the best player in the world. I am so glad the Lakers lost!!

By the way, that Sugarland song is so much fun, love them.

It always does my heart good to watch the Lakers go down in flames. Congratulations to the Celtics. After so many years of them being horrible, it is nice to see them back amoung the best teams again.

And d10 is right, Kobe is so overratted. Jordan, Bird and Magic would have never allowed their team to get crushed like that in an elimination game. Pretty poor.

Back after a bit of time away...you completed a HALF! Belated congratulations!!!!!!!!!!

Love the new banner! I agree with Chad about the Lakers!

YAY!! Congrats to the Celtics!!

I took the kids to the river the other day for a long walk (letterboxing quest) and we (particularly me) got nailed by the mosquitoes. I'm still itching - 3 days later!

Ah..so we done with the green look now eh?

Congratulations on the softball!

Killer swim, I so envy the peeps that produce such great swims. Congrats on your Celtics. I don't even follow the NBA but can't stand the Lakers since the 80's.

angry anti-lakers people: the celtics are one injury(any of their 3 old guys)away from returning to 24-58