Preparing for a Flood

Blizzard one week, serious flood threats the next. Does anyone remember hearing about the Flood of '97? With our snowfall this year, and rapid melt this past week, flooding has already begun, much earlier than expected or usual. And, they project it to be as bad as '97. With that in mind, I canned my Saturday run and volunteered most of my afternoon to help do some much needed sand-bagging at a friend's parents house, southeast of town.


There's still lots of snow in some areas, and then lots of standing water in ditches and fields. It's horrible. 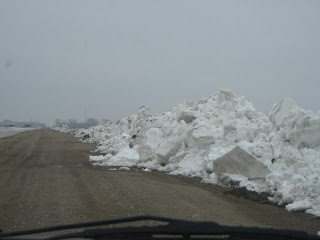 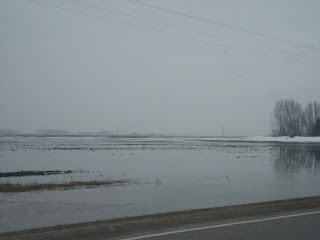 Where I live, I shouldn't be affected by the Red River flooding. However, some localized flooding in the streets and yards are most likely going to happen, due to all the heavy snowfall this year, still frozen grounds, fast melting, and rain to come.
And now, their is heavy rain on it's way. It should be here later this afternoon. The river is currently at 21.53 feet, and should crest to 39-41 feet by Friday, a day earlier than predicted 2 days ago. This flood is going to happen, whether people are ready for it or not. I feel like I should be out sand bagging today.
Does anyone else feel completely out of whack when you fall out of routine for a handful of days? That is the way I felt last week. Even though I got in a couple good runs, most of my days consisted of no workouts, and no Jillian.
But, have no fear I am back. Ha!
I was hoping to go out for a run today in the 50 degree weather, but the wind is horrible. I traded an outdoor run for 20 minutes with Jillian, a short run on the treadmill, followed by a nice ride on the bike. I haven't done much of Jillian in the past week, and I really contemplated starting the 30-day shred challenge over, but I don't know if I could do another 30 days, consistently. So, I am just going to pick up where I left off and see how it goes.
Today's Workout:
Jillian - Day 14
Run - 1.55 miles, 16:05, 10:22/mile avg.
Bike - 12.82 miles, 35:00, 21.98mph avg.
Posted by teacherwoman at 3:35 PM

Sandbagging is definitely work!! I know what you mean about getting out of a routine though. I'm so there right now and it sucks. I really need to get that figured out and get back into it.

That's great that you could help your friends with sandbagging. I hope the flood doesn't hit too hard. What a year of crazy weather! Stay dry and pick up your workouts where you can.

Goodness the weather is weird isn't it... I sure hope the flooding doesn't cause too much trouble for everyone. So, who is this Jillian you speak of?

That is a lot of snow. Thanks for posting pics. Glad you won't have to deal with flodding.

Wow what crazy ass weather. Scary and upsetting too!!!

I hope the flooding doesn't cause massive damage and upset. You were great for sandbagging TW!

oh my what crazy weather!!

i definitely feel all weird when I haven't been able to stick to my normal schedule..I like my schedule :)

WOW, that is a lot of snow that needs to melt. Maybe you should buy and ark.

Take care of yourself. Flooding scares me.

You'll get back to your routine soon. Melting snow means spring even in North Dakota, right?

Yuk, girlfriend!! Call me and I'll come over in the ark and rescue you!!

Good for you for helping with the Sandbagging!
And.....it's a great CORE workout!
Shred, Shmed...you don't need that program when you've got empty canvas bags to fill with sand!
Seriously. Hope you No Dakers, fare well with the floods.

yea i was thinking about you when i heard about the flooding in fargo. glad you're ok!

yikes that does not sound fun!!! good luck!

i am the same way when i get out of my routine, i hate it!!

Ohmigosh, all of that flooding sounds scary! I'll be thinking of you and hoping it is not too bad.

And YES, I totally feel out of whack if I am not in a routine. Hate the feeling!

I know how you feel about getting out of whack with your schedule. My illness really set me back almost to starting over with my pace. But all you can do is working going forward. Can't do anything about the past.

Man how the heck do you manage the weather there? What in the world?!

Wow I don't know how you handle the weather out there! I don't think I could do it!

I knew the 50 degree day we had on Friday was too good to be true - we're now under a blizzard warning! I cannot believe how crazy the weather has been this winter season!

Crossing my fingers for you that the flooding isn't too bad! And I love the new look.

Hope you are safe from the flood and it is not as bad as predicted.
And, I'm always out of sorts when I don't stay on schedule.

I thought of you with all the flooding. Glad you are okay! That is so awesome you are helping. I feel like I should drive to ND to help, those pictures are crazy.

a lot of snow that turns to a lot of water. where i live, it just disappears (doesn't melt...it's so dry and we're at a high enough altitude)

and yes, i'm totally out of sorts after a week off.