Here's the recap of my 2 week vacation...


Christmas with the Family: The first weekend of my break we celebrated Christmas at my house. Steph and Blaine had plans to spend Christmas in Colorado with his family, so we celebrated a few days early, just the 6 of us. It was a nice weekend. 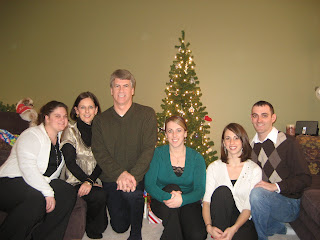 Christmas back home: I drove back to Bismarck Christmas Eve Eve. We celebrated Christmas Eve and Day with my mom's family. It was very nice, but very crowded as well. That's what happens when you have a large family.... 28 grandkids...6 great grandkids... imagine if everyone had come home Christmas...


Weekend after Christmas: During this time I spent a lot of time doing a whole lot of relaxing. My god-daughter turned 10 (gulp) and we celebrated with a bit of bowling! I squeezed in a handful of workouts and read Twilight. I really enjoyed the book and couldn't wait to get out to purchase book 2 of the series. I am almost finished with it. 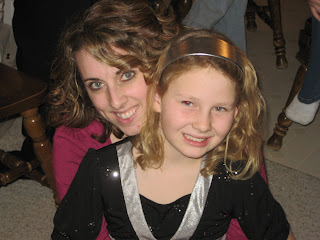 Earlier this week: I was planning on leaving Bismarck Tuesday, getting into Fargo to do some cleaning, and then leave for the cities Wednesday morning. However, that didn't work. Bismarck got another 5 inches of snow Tuesday and I didn't want to venture out on the roads. 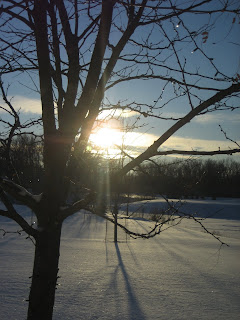 I left mid morning Wednesday, dropped many things off at my house in Fargo and finished my drive to the cities. You could still tell that the roads were in rough conditions due to the blizzard like weather the previous day, but I made it just fine. I planned on staying with my sister and brother-in-law for a few nights. 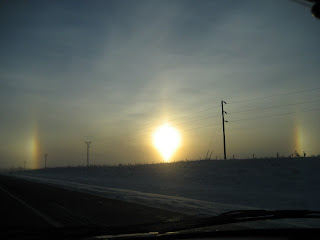 New Year's Eve: We rung in the New Year at a friends house. It was fun and relaxing as well. But I was beat after drive 6.5 hours that day.

New Year's Day: We checked out the 75% off isles at Target and stocked up on some good Christmas decorations, wrapping papers, and such. We played a few games of Scrabble (and I still suck), and watched the movie Ghost Town. It was an okay movie.

Friday: Steph and I decided to try Bikram Yoga since we stumbled across a local Bikram yoga studio in the Chan. The class was 90 minutes long and the room was set at 105 degrees. Overall, I really enjoyed it and look forward to getting back to do it again. Note to self, even if you think you are drinking enough water after Bikram, drink more. I did not enjoy the headache later that day.


Saturday: I decided to leave the cities bright and early, hoping to beat out the storm that was coming. Yes, another storm. The roads were good until I was half way home and then they progressively started to get worse. I was home before noon and that is when it was just starting to get really ugly around here. I am glad I left when I did.


Today: I got up and met up with a friend at the pool. I did a nice long swim and probably could have gone longer. I have unpacked, done 5 loads of laundry, went into work for about an hour and put away my Christmas decorations. I am having difficulties with my toilet in my master bath, and am waiting for help with that... yay...the joys of being a single homeowner!

Wonderful break! Thanks for sharing those photos. And a solid December.

Does school start tomorrow? It does for my kids. Sigh...back to the daily grind.

Yep... School starts tomorrow... but we are lucky enough to get a Jean's day or first day back! ease into things! LOL.

That sounds like an awesome break, even with all the driving and blizzards. Thx for sharing the great pics.

I'll take your word for it, on the Bikram Yoga. Glad you enjoyed it. But, ummmmmm, that bend-and-sit-around-in-105-degree shiz just aint for me.

Great month of workouts, homeslice. Good luck getting re-adjusted to the grind.

all the photos are beautiful! Happy New Year, I look forward to blogging with you in 2009!

Looks like you had a great break! And your stats for December are really solid. Nice job.

Those are some amazing stats! Great job finishing 2008 ahead...

I'm jealous that you tried that yoga, I've been wanting to. When my sister moves in, I'll see if she wants to go do it with me. I'm glad you warned me about the water!

Sounds like you had a great holiday. Good luck with school tomorrow. Your December stats are awesome especially when you think of everything that goes on in December. Way to go!

Wow, you had fun! Also, sorry about your Vikings. Quarterback, please? Maybe draft or free agency will be good to y'all.

You were busy but sounds like fun. Hope your first day back goes well.

Sounds like you've been busy and had a great holiday vacation. Happy New year!! and have a good day back at school tomorrow!

Sounds like a great break, other then the weather. Great job with the training in December.

Sounds like you spent your time well. Happy New Year!

welcome back! Sorry you have to go back to work tomorrow...my girlsl don't go back until Jan 13th!

Sounds like you had a good break! Have a good first day back at school tomorrow.

Wow! That sound like a relaxing but cold vacation. I go back to school today too. Three week vacation over for me too.

Sounds like you had a wonderful holiday season. Great job onthe workouts too. You guys certainly got a lot of snow.

What a fun holiday break! Lots of family time. Your numbers are great! Kudos to you!

Sounds like you had an awesome trip and you smoked your old numbers! Way to go chica!

You had a good Christmas :-) and you really turned it up in December, training wise! Good for you. Bikram Yoga is HAWT!! Literally. LOL....

Looks like a fantastic Christmas! You're fam is always the cutest! (Seriously! I'm hoping your parents will adopt me or something HAHA)

great pics!!!! looks like you had a great holiday season :)

looooove twilight. i am still sad i am done with the series :)

It sure looks like you have had a wonderful holiday break. Nice job with the training, too.

Sounds like a great break. Thanks for the photos, very cool.

Great break! I am still scared of the Bikram, especially of this headache talk. I hope summer gets here sooner than you expect.

Happy New Year and best wishes for a strong healthy 2009!

Sounds like a great break! It's so wonderful you got to spend time with your huge family!

You got some pretty good workouts in this month too. Good job!

Interesting as one of my friends just recommended Ghost Town said she really liked it. I'll be curious to find out what I think of it as seems you and I have similar tastes in things. Although she really liked the Twilight books as did another friend and I finally said they were OK at the very end but wasn't a big fan of them till about number 4...