Tonight was the night and nothing was going to get in the way of me joining the cycling group for my first real ride ... not even the rain that came down ... twice before 6pm...

Okay. There's nothing more nerve racking then joining 8 other guys for a ride ... who obviously have some experience... and dressed like they were part of Lance Armstrong's peloton. But, before I knew it we were on the road. First mile was just making our way north through Fargo to hit up the old highways. I was a little nervous when we had to clip out to stop at one of the busiest 4 lane roads and then try to cross it without a light. Yikes!

Once out on the open highway, it was beautiful. The sun was starting to drop in the west, the fields were so green. There was a heavy northwest wind the could knock a person off their bike and into the ditch. It was a nice challenge.

A few miles later we turned and headed east, towards NDSU. I was afraid passing the landfill was going to be bad, but it didn't compare to passing whatever the hell that complex was near the U. Smelled like shit. Cow shit. Absolute cow shit.

Shortly there after, we were heading south again, through downtown Fargo and then west again back to where we started. It was beautiful. The weather was beautiful. The ride was wonderful! It was nice to know that the knew girl wasn't holding up the regulars! There were a couple stragglers behind me!

I am looking forward to joining the group again.

Tomorrow is a REST and PREP for the half marathon! Ready or not, here it comes! 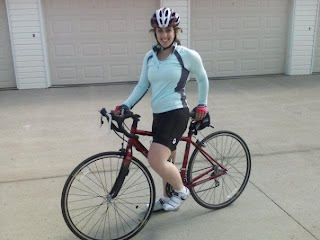 If you want some tips to (look) like armstrongs crowd, send me an e-mail! I'll give you some techno energy name drops also ;)

forget the peloton.. you look hot on the bike :)

Btw.. are you used to riding clipless?

Wishing you a great race!

Can't wait to read all about your race report! You are so awesome, i would of been intimated by all the boys on the bikes...but sounds like you kicked some butt!

I started a new blog...check it out when you get a chance...

Ooooh! Looking HAWT!! (the bike that is) :-) Way to go on your ride! That is awesome!! You are becoming a masheeen!!

It's been a long time since I've inhaled some of those smells myself. Sounds like you kept up with the boys just fine on your first group ride. Good luck tomorrow!!

Look at you sportin the new bike. Way to keep up with the boys.

So glad you are finally having good weather.
Sounds like a great ride!
Have a great race...will look forward to the report!
Take Care

WHOOOO HOOO look at you! You look like a pro!

GOOD LUCK CHICA!!! Have a great race and have fun!

Good luck in the 1/2 marathon, mom and dad will be thinking of you when we do our 6 miler. so proud of your dedication!!!!!!

Awesome job... and you look adorable in your bike attire!

Sending you TONS of well-wishes for your 1/2 marathon this weekend. I can't wait to read your post-race report!

Good job on the bike ride! Good luck with the half!

Glad to hear the group ride went so well! Way to represent for the ladies haha!

Can't wait for the race report!

What to go, love the new bike!!

I'd be nervous out riding with "the boys"...good for you!

LOVE the photo you look the part now you are playing the part! that ride sounds glorious. good for you. All yu peeps astound me how you fit Tri training into your schedule, good for you!

You look awesome in your cycle gear on your new bike!! Glad you had fun.

Glad you found a great group to ride with. It sounds like fun.