Okay folks. I have been away from blogland for a while and I apologize. Despite the 7 some inches of snow Fargo got Friday, I did make it home (after 50 some miles of pure crap) and was able to enjoy Easter weekend with family to the best of my ability... short one sister and brother-in-law. The weather was just not favorable for traveling from the cities. sniff sniff. But, I will see them this weekend as I will be in the cities for my TRIATHLON! Wahoo!

While I was home, I only managed to get in one run. A short one at that. 2 miles. But, I did get to watch a lot of basketball, take in a D-league basketball game, and just relax a bit. It was very much needed.

Yesterday I got back to Fargo, disappointed to see the snow still on the ground as Bismarck was bare and rain was falling on Friday. Blech. I was hoping for nice weather to get in an outdoor run but that wasn't in the forcast. I hit the gym and tried to enjoy my time with the thrillmill. I did the same this afternoon. But it was so damn hot in the gym that I wanted to die. I guess it's time to start pulling out the shorts again. I have just been wearing yoga-like pants because of the cold outside.
I am off to watch the rest of American Idol. Later gators. 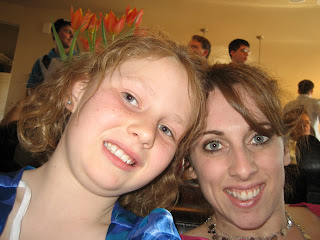 My 9 year old God-daughter and I
Posted by teacherwoman at 7:21 PM

Glad you had a good break!

Ah yea...I'm with you on wanting this crap gone. Our forecast down here this weekend, rain mixed with snow...ughh...but since it's supposed to be mid-40s I'd think it will be more rain than snow so hopefully that will help clear out this stuff.

A friend bet me that before August that I would be complaining about the hot weather and wishing for fall...probably right, oh well!
Great pic, sorry your sis could not make it - I know you were looking forward to hanging with her!
Take Care