I haven't participated in any races since the end of December 2006. I just seems wrong that it has been that long. I guess grad school, applying for jobs, and other summer events took over my life! 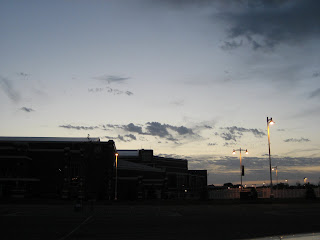 I knew that registration started at 7am, 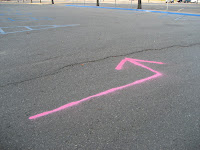 but I thought the race didn't begin until 8. Good thing I like to be early for things as I got there shortly after seven, only about 15 minutes before the race began. I grabbed my bib, pinned it to my shirt, turned on my ipod, stretched, and began to mentally prepare myself.

I never know how to dress for races in ND. The one's I have done have either been in fall or winter and the weather is always unpredictable. The temp was 61 degress with a bit of humidity and a lot of wind. Yuck. It doesn't take long for my body to get extremely warm when running and I hated the idea of wearing a heavy top, but it was just too cold without it. I chose to wear my short yoga pants, tank top, and a longsleeved running shirt over the top. 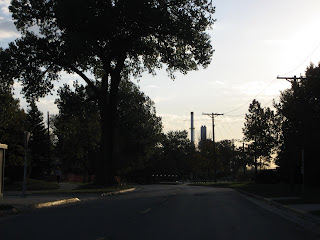 When mentally preparing myself for this run, I thought about what I wanted to accomplish. I didn't train enough to really expect to break any records so I was hoping for a good steady, strong run. In the back of my mind, a part of me wanted to beat my extremely slow pace from last year.... 39:46. Yuck. Looking around, I noticed the crowd consisted mostly of very young college students who probably could have been on UND's cross country team. It seemed as if there were only about 30-40 people running the 5K race. The starting gun went off and as people were flying by me, I kept telling myself "pace yourself...pace yourself" ... prentend someone is running with you. 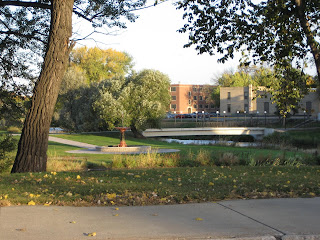 The route was very similar to last year's race.... starting at the wellness center, running through campus, making one large loop. It was absolutely gorgeous. The leaves were falling, the weather was crisp and but quite breezy. I kept playing tag with a father/daughter team. They were running a bit faster than me, but taking walk breaks every couple minutes. I felt that we were going to be the last 3 to cross the finish line. I didn't see anyone but a couple walkers behind us. It was during the last mile that I really felt that I had a good steady stride and it became my goal to cross that finish line before the father/daught team. 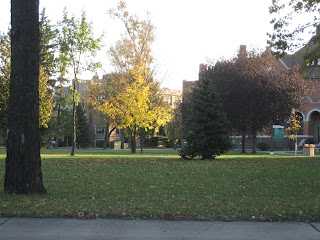 And I did. With a couple minutes to spare. I pushed myself hard in that last half of a mile and just wanted to finish strong. Of course that was when the wind was the strongest and against us. If I calculated correctly, I think I might have PRed, beating 37:14. I don't know for sure, and I haven't found the race results online yet. I am almost positive I came in under 36 minutes. We'll just have to wait to find out! All in all, it was a good race and I am not as sore today as I was expecting to be. 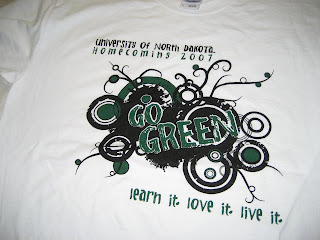 Tomorrow starts Octapolluza! I am so pumped!
Posted by teacherwoman at 1:15 PM

Beautiful pictures! Can not wait for the official race results.

great job Staci! :) That's a nice T-shirt also, totally wearable (unlike a lot of them!). Have a great sunday and start of Octapolluza :)

i meant Stacy not Staci. urgh.

Wow that seems like a long time to have not raced - life sure does fly by.
Great job on the race and the PR

I was going to say the same thing as Neese! That shirt is actually one of the prettier ones I've seen LOL. Awesome job homie!! ;D ;D

I should have ran just for the shirt! I like it. I'm glad to hear it went well for ya. We should find a race in the cities to do, so then you really have an excuse to come visit! Love ya!

Congrats on the 5k. Cool looking shirt as well.

I have a new teacher friend that is from North Dakota and was a cheerleader at UND. This is her 3rd year of teaching and she just moved into the area. Do you know any former UND cheerleaders with the name Leisha?

Good job on the race!

Whooo hoo! Congrats on the race! Get pumped for Octapolluza!

that's a great shirt! actually one someone would want to wear! and you can wear it proudly!

Good job!! No matter what the official results, you seem happy about your race and that is what is MOST important. :)

WOOHOO!!! Congrats on a great race!! Sounds like a PR is going to happen!

hey hey HEY!! nice race. i think i like your new pre-race routine. show up 15 minutes before the start so there's no time to worry and stress about anything. ;)

Good job on the race and possible PR!

Very well done :-) You rock, girl! Sounds like a perfect day and a perfect race. I love it!! Don't wait so long for your next one now that you are in the work force :-)

You go girl! Way to run a steady pace and finish strong! I loved your pictures too... ND is beautiful. You should be very proud of yourself!

Great job!! I'm glad that you were able to beat your PR. Have a great Octapolluza!!

I love the fall season, well I like all the seasons, it's a nice change from summer. Great pictures and way to go on holding your own pace.

Great race report!!! Sometimes those races we're not really prepared for can turn out to be some of the best, most fun ones! Glad you had a PR!!!!

Octapulluza...darn it. I have to figure out my goals. And I did nothing over the weekend...I could've been thinking. This month crept up on me!